Over a long period of time finally we had a nice weather today, so I headed out with 2 friends & Itatae to measure fixing block locations for beams.

She looks cute ain’t she 🙂 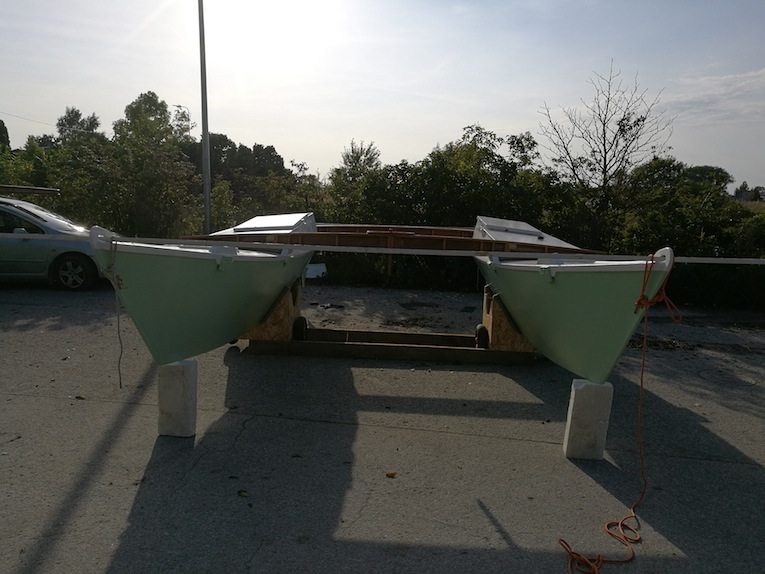 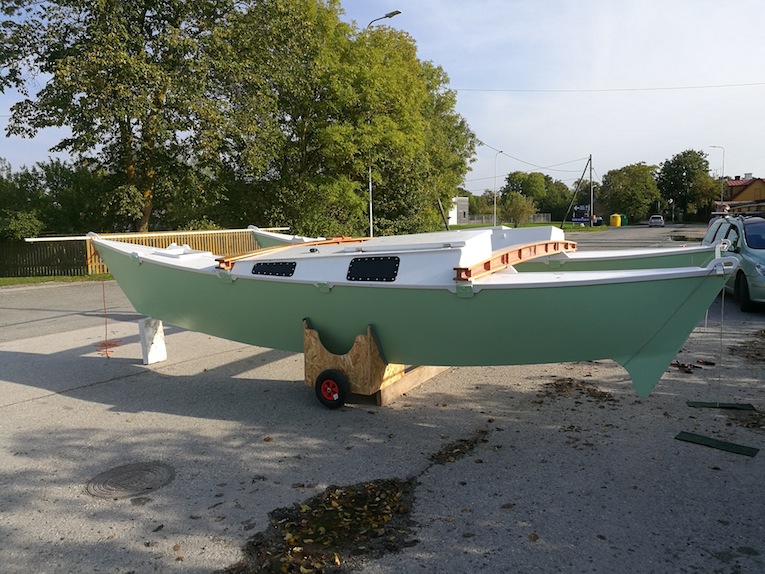 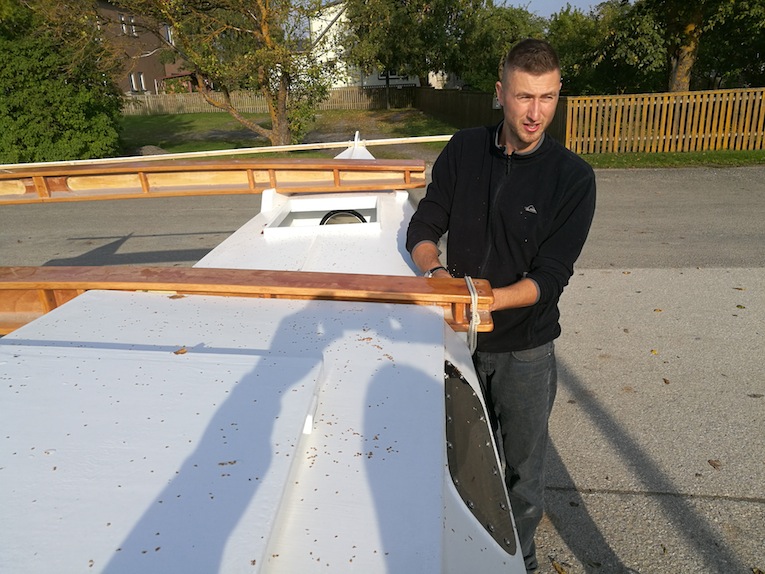 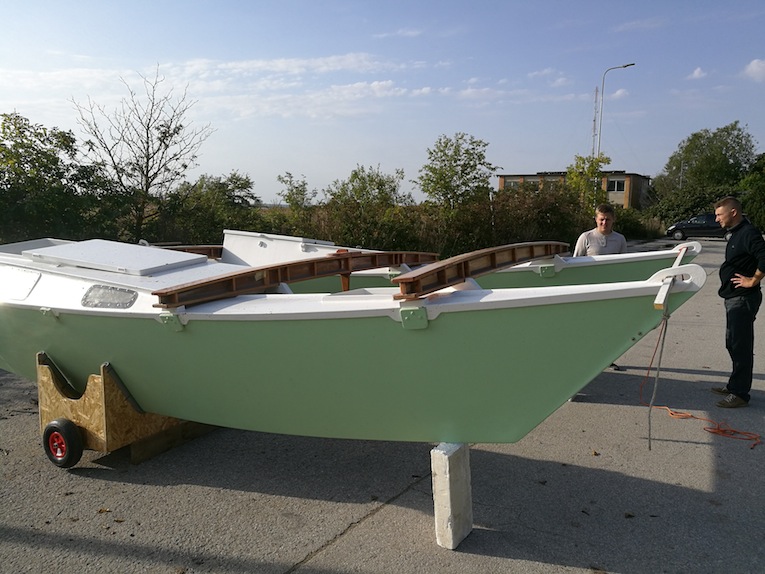 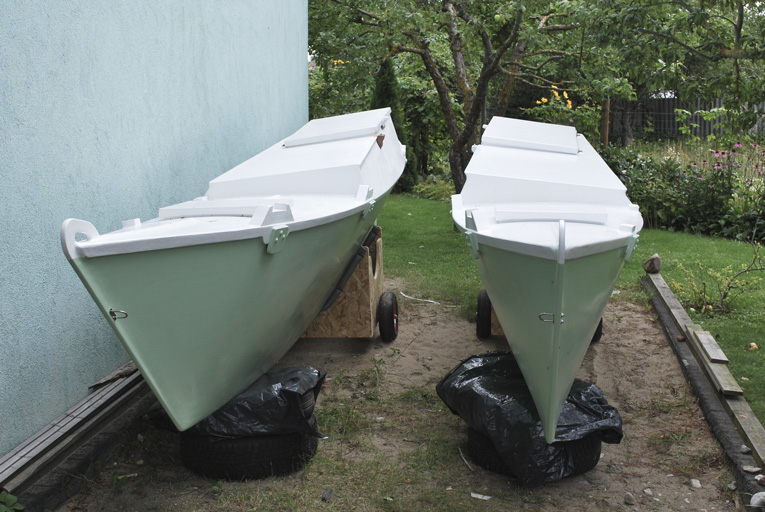 Its already August – soon enough nasty long, damp & dark winter will knock on the door… Still I have some glimpse of hope, as I finished port hull paint job — I only need to fit windows, main hatch hinges and rudders. 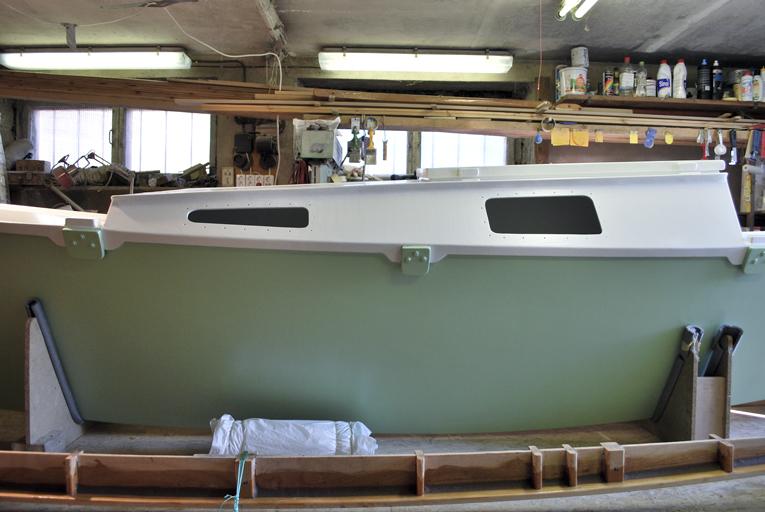 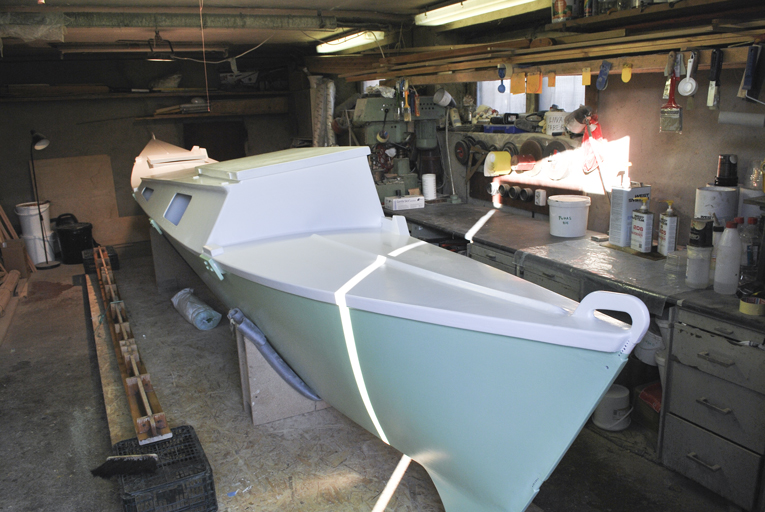 Just look at these neat curves 🙂 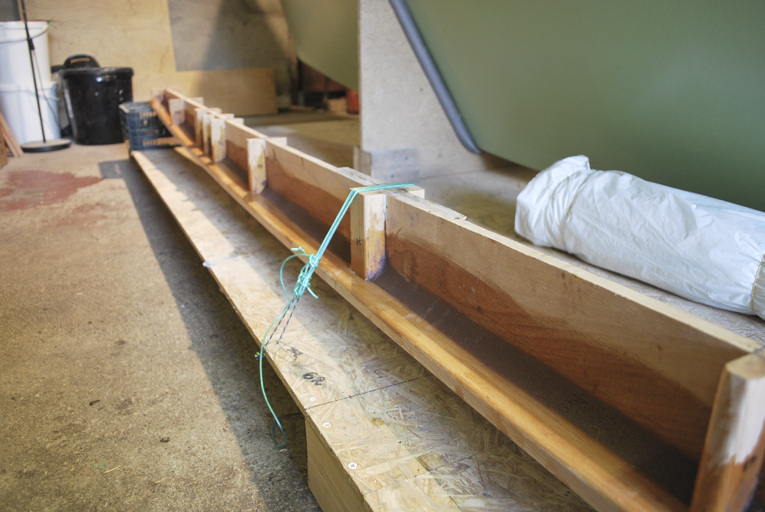 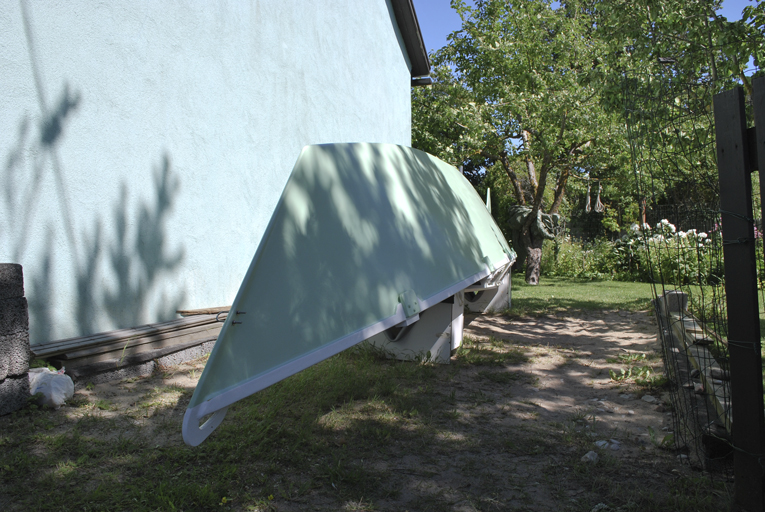 A fellow amateur Tiki builder Brad shared his experience in Southwinds magazine. Check out his story in page 44. Attention please! Ladies and Gentleman, may I introduce you to your sleeping quarters.

A view towards stem… 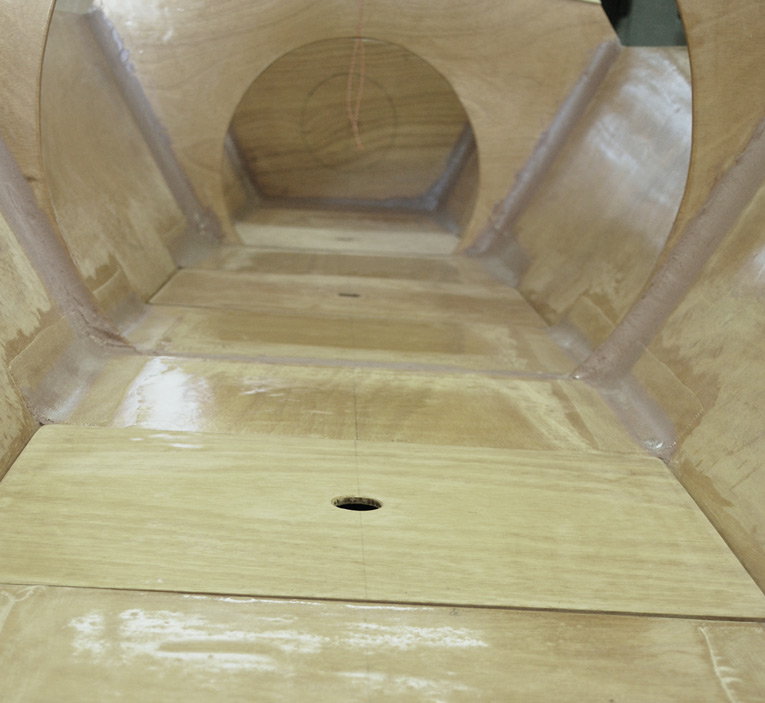 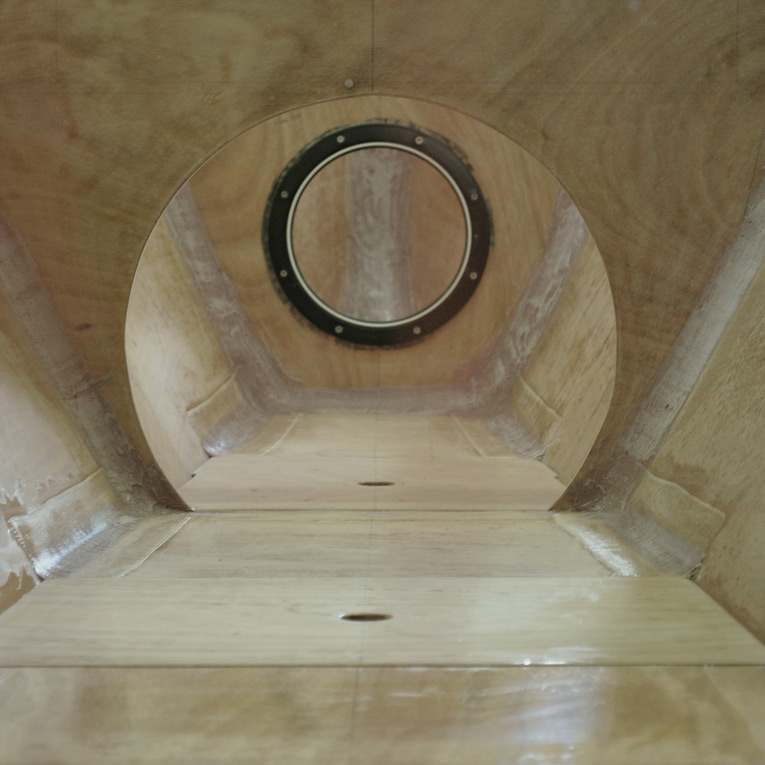 Please do not forget to admire those nice fillets that will make you feel comfortable and cozy while you are enjoying your stay! 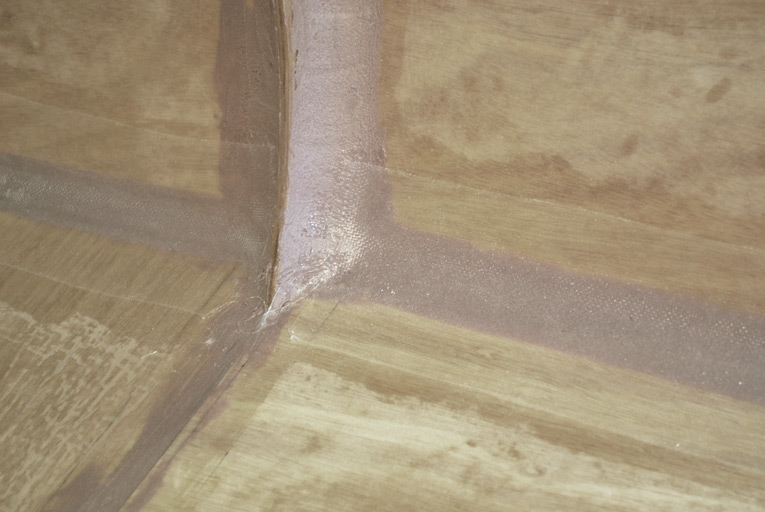 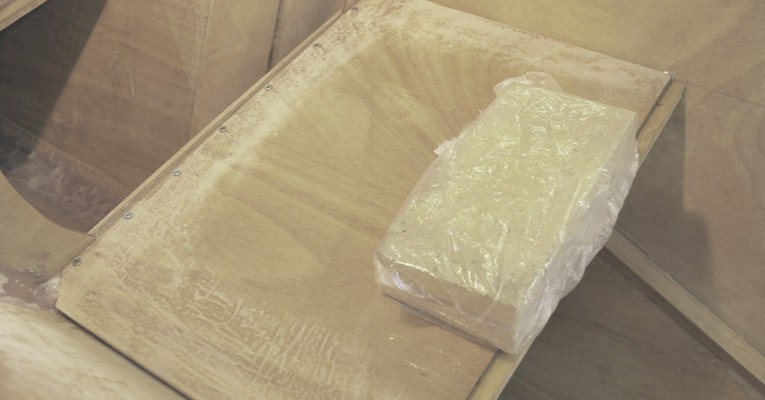 Gluing bunks. Deviated from the building instructions a bit – I did not stitch the bunks, instead I went for temporary screws and some nice bricks. Also I did not loft the curvatures like Wharram suggest, therefore I took the measures in situ and cut out the bunks accordingly with strait edges against the broadsides. The camber of the broadsides leaves just a few millimeter wide gap between bunk and side, which would be easy enough to fill with thickened epoxy. 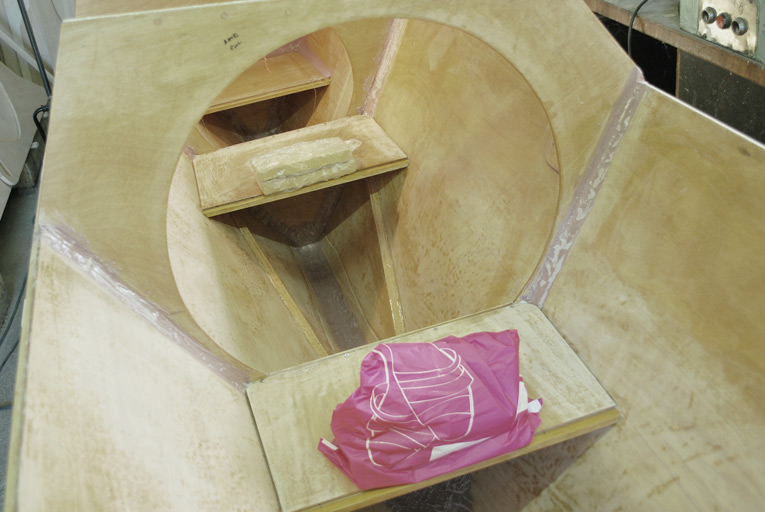 Fillets. After colloidal silica and epoxy mix has been cured next step was sculpting some nice radiuses (low density filler) for upper- and underside of the bunks. Later one made me wish I was born as a bat – a job not suitable for sweating out the hangover 😉
I waited until upper side radius was almost cured, then laid gently 100mm 175g glass tape, smoothing with light strokes of brush until it was leaning tight against surface after which epoxy was brushed over. 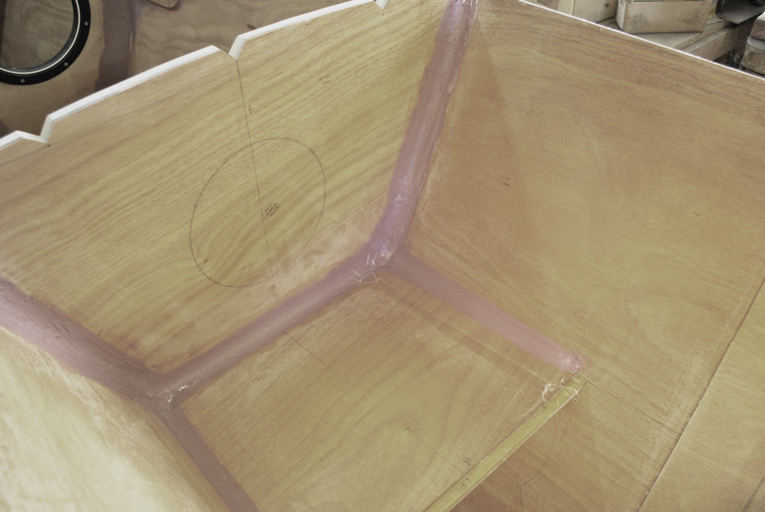 PS! Peanut butter. If its not necessary to squeeze fillet into some narrow gap then peanut butter consistency would work best. It paid off to spend an extra minute to measure out the right consistency. At least for me.