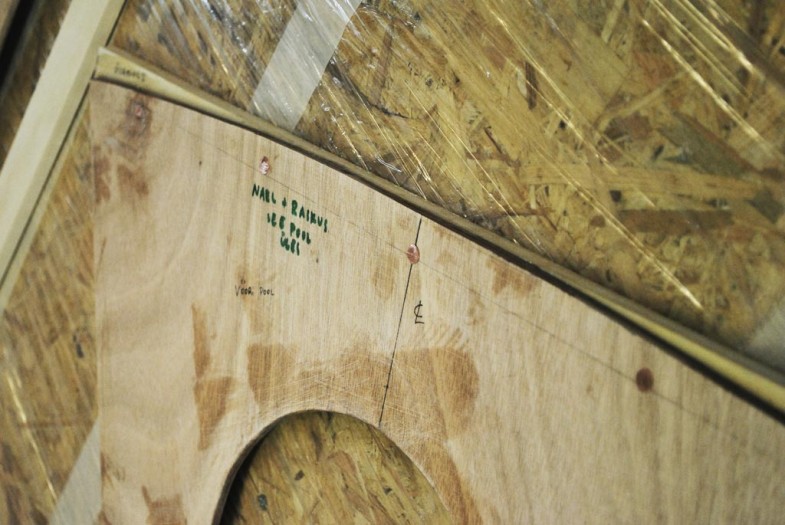 Gluing deck beams to bulkheads. Using epoxy and microfibres (as its bare wood).

Lesson learned: nailing the thing down could be pretty messy – deck beam tends to slip from its desired position, pressure of the nails stays kind of uneven, there is constant threat of splitting the wood in the end of the pieces (poplar, Populus tremula, in this case) and finally it takes to much of hammer-power to drive those nails home and this is something you ought not want to to in the edges of narrow wood pieces. So I pretty much missed that later part, because furthermore it seems that if I will hammer fiercely, then all the remaining glue oozes out of the joint finally.  Ah yes, did I mentioned sanding – you have to get those copper nail heads and leftover nail tips in the other side pretty much even with surrounding surface in order to get decent outcome.

So, despite Wharram suggestion to use nails in gluing deck beams, butt blocks, sheerstringers etc., I decided to abandon the nails (as they are not structural elements anyway) and go for clamping or weights or using temporary screws, depending on situation. And as I mentioned in previous post I have gathered reasonable amount of wood clamps anyway.

PS! Only deck will be nailed to the hulls, as there are not any of intelligent solution for that, at least something that Im aware of.

PPS! Recently there was pretty intense discussion over the nails question in Wharram builders forum, jump the thread here.